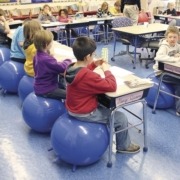 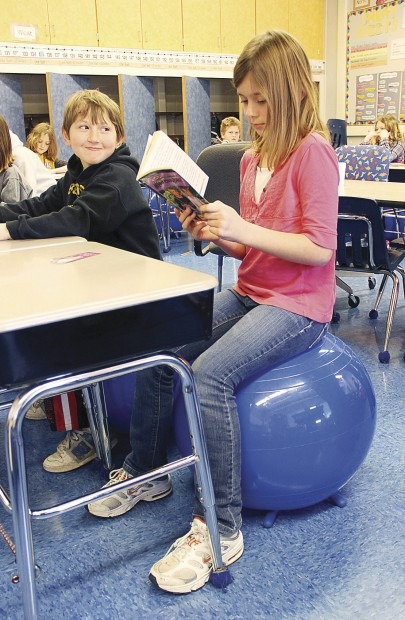 In most ways, the students in Diane Bodnar’s third-grade class at Mark Twain Elementary School in Bettendorf looked very much like any other third-grade class as they sat quietly and worked on their handwriting last week — with one glaring difference.

Rather than traditional plastic desk chairs, the students are sitting on blue exercise balls.

According to some studies and the manufacturer, WittFitt, the exercise balls help students have better posture, strengthen their core muscles and help them stay focused on their lessons.

Principal Caroline Olson and special education teacher Carrie Moberg sought and received a $1,750 grant from the Bettendorf Community Schools Foundation to fund the purchase of 52 WittFitt stability balls — 32 for use by Bodnar’s third-grade class and special education students at Mark Twain, plus four for each of the other five elementary schools in the district.

The Mark Twain PTA also contributed $200 toward the project.

The students spent some time

sitting on the balls for a few hours a day to get used to them, then started sitting on them full-time last week, Moberg said.

“The results have been great,” she said.

Bodnar said the balls are good for “active learning” students who have trouble focusing. While students sitting in a traditional chair can get uncomfortable and start to fidget and lose focus, sitting on the stability balls forces the students to sit up straight with their feet on the floor, she said. The act of balancing themselves on the ball requires them to focus.

“It gives them that chance for movement,” she said.

Every once in a while, you can hear the soft squeak of rubber against rubber.

The occasional squeaking is actually an indication that the students are sitting too close together and are moving around, Bodnar said. She said the students decided to rearrange their desks so they won’t be sitting right next to each other anymore.

STABILITY IN THE CLASSROOM
BOUNCY BALL