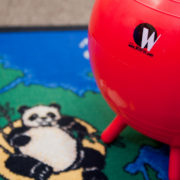 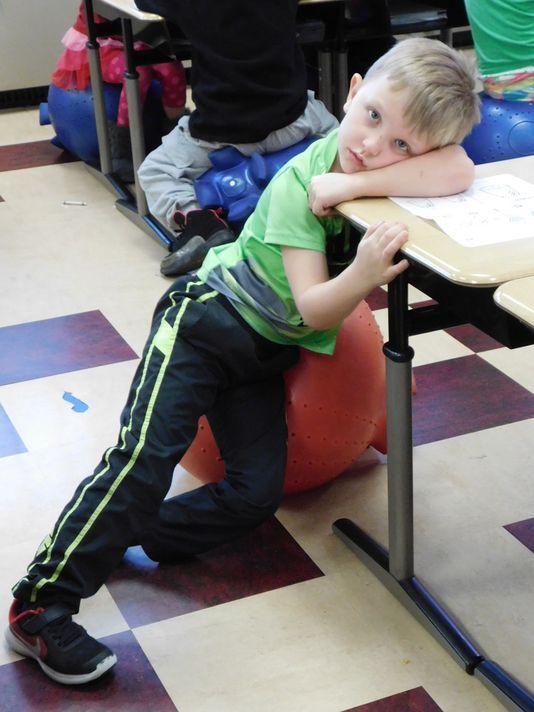 CLYDE – The pupils in kindergarten teacher Aubrey Baur’s class usually have a ball — actually, they sit on ball chairs.

It is no surprise that the students bounce on the balls, but that does not stop them from working on their assignments and staying on their seats.

Baur, a third-year teacher at Clyde Elementary School, said she has had her own learning experience incorporating the ball seats into her classroom.

“I had tested one out with last year’s students,” she said. Then, for the 2016-17 school year, Baur’s parents donated 24 colorful, inflatable chairs for her class at a cost of about $25 per chair.

“They allow the students to still sit at their seats but allow movement,” the teacher said.

Baur said that studies show the work expected of kindergarten students is becoming harder and harder. “The kids can’t sit still that long,” she said. In kindergarten, children are expected to count to 100 and be able to read, the teacher pointed out. 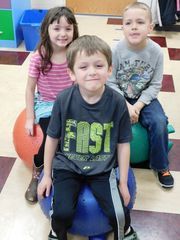 Looking for options, Baur brought in ball chairs, which are inflatable.

“They allow the students to still sit at their seats but still allow movement,” she said.

During class, tots bounce on their seats, roll back and forth, and still keep working on their assignments. “I found that some of the kids who had a harder time keeping up on their work, those kids are doing much better.”

Baur’s class is not alone at Clyde Elementary when it comes to unique seating. Principal Jackie Davis said she has two third-grade teachers who also have unconventional classroom seating.

“I believe it gives students choice and adds to the classroom climate of being comfortable, and therefore it would indirectly have an academic impact,” Davis said. “If they have flexibility, it gives the feeling of self-control — and they do better.”

Davis said her initial concerns that the alternative seating could disrupt the learning process proved unfounded.

“That has not been the case whatever,” she said. “Every time I have been in any of those classrooms, they have been time on task.” 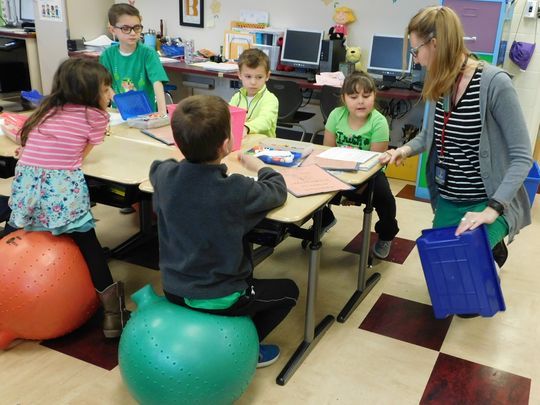 Clyde Elementary School teacher, Aubrey Baur kneels while talking to her students and passing out folders.

“The kids love it,” the principal said. “As kindergartners, it probably needs to be more phased in. In third grade, they can start off better.”

Baur’s students are big fans of the ball seats.

“It feels good,” 6-year-old Nathan Scruggs said while sitting on his green ball chair. “I like bouncing on it.”

In preschool, Nathan used a regular student chair, he said. “I like the ball chair better. Everybody knows that.”

Six-year-old Alivia Aldrich said the ball chairs are “good”  and that she likes them because “you can bounce.”

Baur and her students did have a learning curve when the ball chairs, which have feet, were incorporated into class at the start of the year.

The teacher learned quickly that kindergartners had to be taught that the balls were not toys — and that her young students needed to learn to stay seated in a standard chair before being given a ball chair.

“First of all, I realized that coming into kindergarten everyone starts at different places,” she said. So the ball chairs became a reward for those who wanted a chair. The students had to earn a ball chair by earning stickers daily for being a good student.

“They essentially need to be good for a month,” Baur said.

In her class, 90 percent of the students earned the right to qualify for a ball chair — but no student was forced to use it.

“There are some rules with them,” she added.

While students may bounce on the chair, they also must stay on their chair. Also, students must not have sharp objects around the rubber chairs. Baur said he had only one pop so far this year, and she had an extra one on hand. 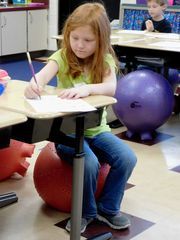 Alexis Davidson rests comfortably on her red ball seat while filling out her assignment paper at Clyde Elementary School.

She found that with normal student chairs, children were regularly finding reasons to leave their seats as sitting still was a strain for little children. Students now tend to stay “seated” on the balls — rocking, bouncing, rolling and even sliding a bit — but the motion does not upset their teacher.

Baur plans to use ball chairs again next school year, and they should last a few years. She added, though, that her 2017-18 students will start the year with standard student chairs and again have to earn their right to bounce.