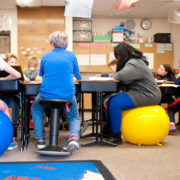 The big yellow spheres in Jim Duey’s sixth-grade writing classroom at Phoenixville Middle School can be seen before you enter the door. Some students sit with both feet on the ground, bouncing slightly, every so often. Others have both legs underneath them, perched on top of the sphere. But they are all working. Duey has been teaching for 25 years. Before he taught at the middle school, he taught in West Chester and in Rome, Italy. This is his third year teaching sixth grade. Three years ago, while Duey was teaching a “movement in teaching” class at St. Joseph’s University, a librarian at the Westtown-Thornbury Elementary School brought in a video of students in a classroom on exercise spheres.

After that class, Duey went to a Five Below discount store and purchased five spheres for his own classroom. “I thought, this has got to work and I noticed immediately that with a lot of kids it just helped settle them,” he said. “Kids don’t get up and use the washroom and they don’t get up for a drink of water a lot in here because they don’t need to clear their head.” Phoenixville students get a bounce from ‘exercise spheres’ in classroom … http://www.pottsmerc.com/apps/pbcs.dll/article?AID=/20130226/NEWS… 1 of 3 2/26/2013 10:46 AM Students may not know exactly why they need to get up and move around but they can feel the difference when they study. “I like it because you move a lot and you can’t lay on the tables and fall asleep,” said Robbie, 12, a student in the class. Morgan, 11, and Declin, 12, both think the spheres are fun. All three said they focus better on their assignments compared to other classes. Duey originally earmarked the first five spheres for students he knew needed them but after the holidays that year, half of the class came to school with them.

Last year, Duey received a grant that enabled him to purchase more durable spheres from a company called WittFitt LLC for the entire class. The benefits to these spheres are their durability and the small feet attached to the bottom that prevent them from rolling all over the classroom. The spheres from WittFitt come in different sizes and colors that correspond with a student’s height. Preserving the spheres is a concern for Duey, so the spheres have requests from the students. “Like the sphere says, only bring non-pointy objects near me,” Duey said. The sphere isn’t a drum either. Duey said that students are not required to use the spheres and he hasn’t had any parents come to him with problems. In conjunction with the spheres, Duey incorporates other learning styles into his classroom. He will lead his class in “hookups” that engage the student’s right and left brain. They stand, cross one foot over the other, then cross their arms and link their hands. Duey leads the students in deep breathing exercises as well.

According to Eric Jensen, a brain researcher and former teacher, students in middle school and high school can only focus for 12 to 15 minutes. At least twice in a period, Duey has his students do something that isn’t learning. “It may seem like a waste of time in class, but what it does, is it enables them to have a moment of not learning which is as important as learning,” Duey said. He also said that the spheres have to fit into the teacher’s style of teaching or they won’t be beneficial. This seating arrangement will not be school-wide, said Sandra Claus, community relations coordinator for the Phoenixville Area School District, but some of the elementary school classrooms are using the spheres as well. “I’ve had a lot of kids tell me that they miss having them,” Duey said. Morgan, Declin and Robbie said they will miss the spheres next year, too.

STABILITY IN THE CLASSROOM
12 DAYS OF GIVING