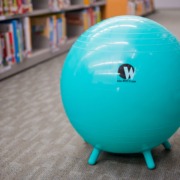 Students at the Dr. Levesque Elementary School in Frenchville participated in a pilot project that replaced classroom chairs with stability balls.  Posted June 03, 2013, at 3:23 p.m.

Public school students in Aroostook County who sat on stability balls instead of chairs experienced benefits including improved academic performance and better health, according to results from a recent formal study. The study, conducted during the second half of the 2011-2012 academic year, assessed each student’s “squirminess,” task level and posture before and after using a WittFitt stability ball over a four-month period.

It also assessed standardized test scores for each class, penmanship, observations from teachers and parents, and student opinions. The initiative replaced chairs with stability balls in 13 classrooms located throughout Aroostook County, after teachers completed training during the first half of the school year. Students spent part or all of each day sitting on the stability balls at their desks and in other parts of the room. The latex-free stability balls, which have legs on the bottom to keep them from rolling, are similar to the type used at the gym and in the home for stretching and strengthening exercises.

The study found that more than half of students were more able to sit still and stay on task, and showed improved posture after switching from a chair to a ball. Students also reported overall satisfaction with using the balls as chairs. “The benefits are greater than I had ever imagined,” said Robin Norsworthy, a fifth-grade teacher at Zippel Elementary School. “The kids are quieter when getting into groups and they move more quickly between tasks. They take great ownership of the stability balls, and they love using them.” The study also found that about 80 percent of students improved their standardized test scores over the course of the year. Teachers said that students’ academic performance remained the same or improved after using the stability balls in classrooms. The pilot project included students ranging in age from 6- to 18-years-old in seven school districts. Teachers assessed their students before and after implementing the stability balls. Each student also was measured for a custom-sizes ball. The project came about through a partnership among public health organizations and schools that kicked off in early 2012.

It was funded by The United Way of Aroostook, The Aroostook Medical Center and Eastern Maine Healthcare Systems. “When we began the project, we anticipated that the integration of stability balls would improve the classroom environment, allowing students to move throughout the day, therefore improving facets that would lead to improved academic performance,” said Martha Bell, community transformation coordinator for the Aroostook Public Health District. Replacing classroom chairs with stability balls helps students focus, study… http://bangordailynews.com/2013/06/03/health/replacing-classroom-chai… 1 of 2 6/4/2013 2:52 PM TAMC helped analyze data. “The analysis of the data is an important step in local efforts to curb youth obesity and improve the overall health of children and adolescents,” said Jorge Pineiro, a TAMC pediatrician.

STABILITY IN THE CLASSROOM
PHOENIXVILLE STUDENTS GET A BOUNCE FROM ‘EXERCISE SPHERES’ IN C...

Why Do We Use Stability Balls As Chairs?
Scroll to top