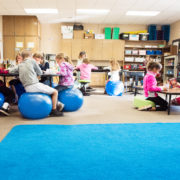 FRENCHVILLE – Fourth graders at Dr. Levesque Elementary School were able to connect via video teleconferencing to a class at Zippel Elementary School in Presque Isle and participate in a press conference regarding extra funding to analyze survey results and data in connection with a WittFitt pilot project started earlier in 2012 that introduced stability balls into their classroom.

According to a press release, the WittFitt project is a unique partnership between public health organizations and schools that kicked off in early 2012. The project replaced chairs with stability balls in 13 classrooms located throughout Aroostook County for the second half of the school year. Students in the classrooms spent part or all of each day sitting on the stability balls at their desks and in other parts of the room.

A class from St. Francis Elementary School also participated in the WittFitt project. Pilot program collaborators introduced the stability balls, which are exercise balls with knobs on the bottom to keep them from rolling, in an effort to increase balance, posture, handwriting skills, attitude and focus in students, according to Reegan Brown, WittFitt project coordinator and community education specialist for Healthy Aroostook. Martha Bell of Healthy Aroostook/ACAP said, “The intent of the original pilot was to analyze the effects that the physical activity during the school day has on academic performance, thus validating the need to integrate the two together.” Bell continued, “Participating teachers in the pilot became certified on how to instruct proper use of the balls in the classroom, measured each student for proper ball size, eased the balls into the classroom in segments, and assigned pre-, interim, and post-survey data with the students, parents, as well as themselves. Collection of the data wrapped up in June 2012 and is in the process of being interpreted by Hart Consulting, Inc.” Though the pilot program is no longer active and teachers are simply holding onto the balls they received as part of the program, the data remains to be analyzed. Stevens said, “Now that we have all the data, it’s very important that we analyze it so it can tell us how effective these balls really were, because if it does what we think that it will do, I think that it will be very easy to raise funds around that, because everyone wants to see every child do well.” Raising funds could provide stability balls to more students in the area. According to students in Ms. Castonguay’s fourth grade class at Dr. Levesque Elementary, they want to take the balls with them when they move on to the fifth grade. An increase in funding for stability balls could allow access to a wider range of students, according to Stevens. Dr. Levesque instructor Meranda Castonguay said, “More children can benefit from this than the pilot students.” Additional data analysis will proceed due to a collaborative donation.

Our hope is that the results will encourage schools to integrate more physical activity into the curriculum.” Bell continued, “We think that doing so may have a positive impact on not only their academic performance, but also their health and well being. Progress will only be possible if efforts are supported by a wide range of collaborators, including schools, public health officials, hospitals, as well as other collaborators in the community. We look forward to working with all of these partners to discuss the final results.” At a press conference on Wednesday, Nov. 28, Ms. Castonguay’s class and another WittFitt project class from Zippel Elementary School connected via video teleconference to participate in the announcement of funding. Castonguay said, “I’ve been thrilled to be a part of this.” Brown said, “We were very happy to have this class involved in the press conference. They were pretty much our poster classroom for the project.”

STABILITY IN THE CLASSROOM
Somerset Elementary Class Is On The Ball

12 DAYS OF GIVING
Scroll to top