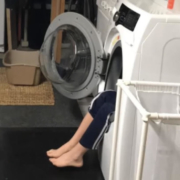 Shenanigan, according to Merriam-Webster, is defined as: a devious trick used especially for an underhand purpose; tricky or questionable practices or conduct; high-spirited or mischievous activity.

Shenanigator, a made up word I found on Pinterest, is defined as, “A person who instigates shenanigans.”

Ian challenges us daily, but at least life is never boring with him around. ‘Shenanigator’ may not be a real word, yet it fits Ian perfectly. Though most of his crazy antics were definitely not funny at the time, recalling them always provides comic relief.  All kids push limits and try to get away with things, however, Ian takes it above and beyond.

Ian’s sister, Grace, recalls, “We were all getting ready for Halloween night and you wanted to get a photo of me and Ian, who was eight at the time. When we weren’t looking, Ian darted out the door. We knew he didn’t know his way by himself, so we ran around the entire neighborhood searching for him. Meanwhile he was just sitting on the doorstep of the neighbor’s house, in his costume, not a care in the world. You were in tears, and I was terrified because it was dark out, and he was so little.” Halloween is scary enough, and we surely didn’t need any extra tricks.

Sometimes Ian’s shenanigans involve not only Grace but one of his personal care assistants (PCA), too. Even with double the supervision, he still finds a way to get into trouble– and enrage Grace at the same time. Ian, at the age of ten, did something that Grace thought he would only tease about, as he should have known better. Unfortunately, he did follow through as she explains: “Tucker was driving us around our neighborhood when suddenly Ian snatched my new phone right out of my hand and was playing around. Before I knew it, he helped it over the open window, smirked at me, then dropped it. You can only imagine what the phone looked like once we pulled over and retrieved it face-down from the curb.”

Several of Ian’s Shenanigans apparently happened with a PCA when I was not around. Only recently has it come to light – while writing my blog and book – that I have never heard some of these funny stories. Our PCAs must know that this is likely better for all involved, as I would probably freak out, and perhaps start to rethink if anyone is truly qualified to watch the Ultimate Shenanigator.

One such incident involved Ian – with no pants. To this day, he prefers to be naked or wearing minimal clothing, such as no socks all winter, so this occasion should not have come as a surprise. Though he wore a seatbelt and a harness on the school bus, he still finagled his way out on multiple occasions. However, on one particular day, Ian could not simply escape. Apparently, he had to resort to drastic measures. Josie, a PCA when Ian was in 5th grade, recalls this hilarious story:

“I walked outside to get Ian off the bus, and this girl, who loves to give reports on how Ian was on the bus, was standing at the front ready to share, ‘You are not going to be happy with Ian. He was not wanting to wear his seatbelt, or his harness, so he took his pants off! And they are still off now.’ I envisioned the worst: Did he take his underwear off too? Was he naked? Thankfully just the pants were off. As I got Ian off the bus wearing just his underwear, I remember being shocked and surprised; I could do nothing but laugh. Who thinks to take their pants off on the bus because they don’t want to wear their seat belt? Only Ian.”

Despite the abundance of Ian’s traveling shenanigans (whether by bus, car, or on foot), often his monkey business is prone to happen here at home, directly under my nose. He knows I dislike hide and seek – especially while I am trying to focus on work –  yet Ian has loved this game for years. He has challenged every PCA to play and seems to find some pretty unusual places to hide. “With Ian you can never be entirely sure what he’s going to do next. Even a game of hide and seek would turn downright silly when I’d discover him in the weirdest spots… like with his legs sticking out of the washing machine,” recalls Molly, one of our first PCAs. We still thank our lucky stars that he did not get stuck or close the door on himself.

Other times, a hide and seek game becomes a running event, as Noelle shares: “One time we were playing hide and seek, and Ian decided to open the garage, and start running! I chased after him for probably 3/4 of a mile. When I asked why he ran away, he said it was because he was mad at me for not driving him to Sky Zone.’  I was 14.” Instead of initially expressing himself by using his words, which is still difficult for him, or thinking through Noelle’s age and ability to drive, he simply used his legs first. Good thing Noelle is in shape, runs track and plays soccer. Have I mentioned that one of our criteria for being PCA for Ian is to be in peak physical shape and prepared for anything. Connor, who was quite challenging for his parents during his teen years, was put in an equally demanding position with Ian one day. He learned the hard way, you can never really be prepared for an Ian escapade. His mom Kathy hilariously explained this incident, and I am guessing all she could think was, ‘Ah, karma!’

“Connor explained that he and Ian had gone into Ian’s room to play a game. While Connor was setting up the game, Ian got up, went out of his room, and shut the door. Connor presumed he was going to use the bathroom. Then the lock clicked. (Ian successfully used the lock installed on the outside of his door to keep Connor safely in his room, instead of the other way around.) Connor jumped up, and sure enough, the door was locked. He could hear Ian outside the room laughing. Connor said that he tried to coax Ian into opening the door so they could play their game. That didn’t work. Then Connor flat out said, ‘I’m not gonna lie, I was in full on f*!ki#g panic mode. The last thing I wanted was for Chad or Lisa to come home and find me locked in Ian’s room. That would suck!’  So, Connor opened Ian’s window, crawled out, and ran to the back door. As soon as Connor  got to the door, Ian was already there laughing. He locked it, too. Next, Connor ran to the garage door, which was locked at the top with the security lock (ironically to keep Ian in). Connor was able to open the door just enough, and when he looked inside, he could see Ian sitting on the couch reading a magazine. Connor said he was struggling to calmly ask Ian to please come unlock the door. He tried everything he could think of to get Ian to come over and let him in. Ian just laughed and waved, ‘Hi, Connor.’ When he realized Ian wasn’t going to unlock the door, Connor took his ID out of his wallet and was able to jimmy the lock. When he got inside, while Connor admitted that he wanted to yell at Ian, he was able to keep it under control and say: ‘You are SO in a time out right now!’”

Even after reminiscing about all of these funny stories, I am barely scratching the surface on this topic. PCAs have recalled stories of losing Ian at the zoo, crawling under dirty bathroom stalls to retrieve him, paying for a drink he ran off with at the apple orchard, or trying to remain calm when Ian emptied the sand from his shoes in the beautiful J.J Hill historical mansion in St. Paul. I must give Ian credit, as he taps into his clever mind and wild imagination every day. At least our days are filled with surprises having the Ultimate Shenanigator on the loose.

If you have stories to share about your kiddos, or if you have spent time with Ian and have a ‘shenanigans’ story to share, we would love to hear it!    To do so, please scroll down to the bottom and click “COMMENT” right next to the date.  I am guessing I may hear some stories I have not heard before – ha!

GO TO WITTFITT HOMEPAGE
#21 This is ME!