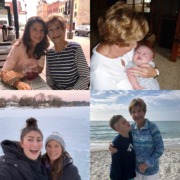 “Yes, I gave you life, but really you gave me mine” -unknown

According to Wikipedia, in Aeronautics, a soft landing is any type of aircraft, rocket or spacecraft landing that does not result in significant damage to or destruction of the vehicle or its payload, as opposed to a hard landing.

Last week, Ian was gathering some materials around the house for a rover he was building in his space class. I love that he shared this with me, and even better yet, that he was so articulate. “These are for my rover, because I want to give it a soft landing,” he proudly stated. Without further thought, he continued to load his backpack. His phrase, however, lingered in the air for a few minutes afterwards. Those simple words ’soft landing’, evoked an image of giving someone a chance to fly and then ushering them back home, ever so gently. Immediately, I thought of my childhood, and how my experience growing up was so safe. At that moment, I not only wanted to thank my Mom, but also vow to always ensure a soft landing for Ian – just as I have for Grace the past 18 years.

Birthdays should really be about two people: the person celebrating their birthday, and the person who gave them life. After waiting more than a year to be together, celebrating with you is the perfect gift. Today, on my 50th birthday, I dedicate this special-edition blog to you. Thank you for always creating a soft landing for me, and for my kids.

According to Wikipedia, in Aeronautics, a soft landing can be achieved by Parachute—often this is into water.

Growing up, you created my personal parachute – full of basic skills, developing beliefs, and your life lessons. When it was time, you launched me into the world and encouraged me to fly, knowing I had this safety net built from your teachings. When I found myself in a troubled spot in life, I pulled my parachute’s ripcord, and everything was okay. I landed softly, because of you. I still needed to make my own decisions and to ‘jump.’ However, I risked more, knowing that when I fell or made a mistake, I would always be welcomed home.

Not only did you prepare me, you do the same for Ian – without hesitation. From his first days at home, you were quick to educate yourself about what Ian needed to reach milestones, such as rolling over and sitting up. Your time and devotion was unmatched. I remember you, and Dad too, spending hours laying on the living room floor playing with Ian. You consistently encouraged him to try a task again and again, and again, all with incredible patience and empathy. Not only were you amazing with Ian, but you simultaneously supported me in a way that only a mother could. I especially needed you during those first few exhausting months with a newborn and processing what Down syndrome would mean for our life with Ian.

Just as you did for me, I am now creating Ian’s parachute for his future landings. I am committed to spending more time teaching Ian what he needs to know, as opposed to doing it for him, because it is easier, faster, or less messy. Though this puts me out of my comfort zone, allowing him to try, fail, learn, and succeed, he is learning how to pull his own cord. His pack will take longer to piece together assemble than mine did, and it may require multiple iterations; but it will be ready for him when he wants to venture out on his own. Or maybe sooner, if I decide to push him out of the plane!

According to Wikipedia another type of soft landing in Aeronautics is, “Being caught in midair, as done with Corona spy satellites.”

There is something magical about someone or something being caught in midair. Sometimes when I am free-falling in the world, and I cannot take one more setback, I have experienced you catching me in midair to assure a soft landing. Even when I was younger, independent, and was convinced I didn’t need anyone else’s support, you waited patiently until I realized that I did. No ‘I told you so’, and no questions asked. Back then, and even more so now, you are always unconditionally present, to listen or simply relate by saying ‘Honey, I understand. I would feel the same way.’ It isn’t about saving me, but giving me space, and acknowledging my feelings, or being a shoulder to cry on and sharing a different perspective, if needed.

Though you can easily read my cues, and you know how I am feeling in a given moment, with Ian, this is not always the case. When he is extremely upset or excited, we certainly know it. However, feelings of frustration or jealousy are not as concrete, and Ian has a difficult time conveying these emotions appropriately. Instead of being able to explain and articulate his current state of mind, he shuts down and acts angry with everyone.

I look forward to the day Ian will be able to understand his own emotions enough to convey his thoughts to me. When he does, I will be right there for him, holding the same space, acknowledgement, perspective, and shoulder to cry on, like you do for me. Though this may take time, for now, I am thankful to be the daughter who still feels safe in her mother’s arms, and also the mother blessed to be doing the same for Grace.

Life will present challenges for both Grace and Ian, but this is a natural part of growing up. Facing obstacles and working their way through life’s turbulence will help them learn about themselves, take risks and get right back into orbit if they fall. And when they do, I will always be their soft landing – just as you are mine.

GO TO WITTFITT HOMEPAGE
#16 Ring Leaders of the Shit Show

#18 The High Five
Scroll to top