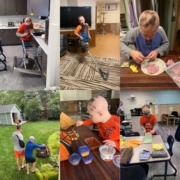 “Get into the habit of asking yourself: does this support the life I’m trying to create?”

Chad and I often imagine Ian living in an apartment with his partner in crime, Nick, who also rocks an extra chromosome. They are such a riot together, so it’s easy to picture all the shenanigans they would get into. Despite the long road to self-sufficiency, there is no doubt in my mind that Ian will be fully capable of living independently. By the time we reach that milestone, Chad and I will definitely want some independent living of our own.

Luckily, our school district is proactive about discussing Ian’s future, far beyond the walls of the middle school. At fourteen, Ian’s academic team is already looking ahead to the next ten years and collaborating on what that might look like. Questions such as these in our Parent Survey were asked prior to our yearly Individualized Education Plan (IEP) meeting: What are our short term goals for Ian this academic year, and for high school? Do we see Ian living with us, in an apartment or group home? What kind of job do we envision Ian having? Although it seems odd to discuss his future employment or renting an apartment, I am reminded that it is never too early to prepare him, and us, for these scenarios. Also, we cannot forget that it will take years for Ian to acquire the life skills he needs.

Using this information to guide us, the IEP is specifically designed to accomplish these goals. We view each academic subject from a uniquely different lens, as compared to a traditional educational path. When it comes to math, topics such as algebra and geometry are not essential; however it is important for Ian to be able to count money and follow a budget. It would be a bonus if he would learn to save his money instead of impulsively blowing it all in the Target toy aisle. In English class, he is focusing on specific words that are practical for daily activities such as reading signs in the neighborhood, and recognizing safety terms.

At school, Ian has a team of more than ten people to keep him on track with his goals, but at home it feels daunting with just two of us. On any given day, we prompt Ian five to ten times per hour to complete simple day to day tasks, which by this age, shouldn’t need reminders. However, there is always an argument, a discussion, or a negotiation that ensues. A simple transition from shutting down his video game to joining us on an errand is an ordeal. The conversation continues as we try to convince him to come with us, and sometimes bribe him saying his Nintendo Switch may come along. Then we may remind him about the rewards available to earn later in the evening. When all else fails, Chad may need to physically redirect him.

After all the time spent trying to hold Ian accountable for what needs to be done, I have no energy left to ask him to wash his dishes or put away his hockey gear. I admit, in these exhausted moments, I travel the road of least resistance, knowing full well that I am not thinking about his future. Sometimes it feels like it is not worth the time and effort for the potential break – whenever that comes. I am used to the instant gratification that comes with raising Grace. We teach her, she learns, and we are able to have a much needed break. When it comes to Ian, I need to persist despite wanting to give up. Sometimes it takes a gentle – or not so gentle- reminder from my daughter to get me back on track.

With fresh eyes, Grace returned from being away for three months at college and observed our interactions with Ian. This new perspective, that can only be gained from time away, was enlightening.

“We need to give Ian the freedom that we know he is capable of. He needs the space so he can grow on his own,” Grace explained, and I nodded, acknowledging that in the past I was not ready to commit to it. Or maybe just too exhausted to follow-through consistently. “Think about it mom,” she continues, “what’s the worst that can happen?” Our conversation resonated with me, and I knew it was time for big change.

I forged ahead with a plan to require more of Ian. I knew this would involve creating visual instructions, repeating verbal cues, demonstrating each step – and a whole lot of patience. I purchased a scrub brush, wrote his name on and asked him to wash his dishes after dinner. I required him to do at least one chore to earn his treat for that night. I created a designated area in the fridge with prepared options so he could pack his own lunch. I typed a smoothie instruction sheet and allowed him to make it on his own, from start to finish. He succeeded on every task, with flying colors – well except a bit of spilled milk.

He doesn’t know I heard him, but as he finished concocting his smoothie the other day, he declares to himself, “It’s hard to make it, but I can do it!” How powerful is that?  He was being his own advocate and was proud he didn’t need my help.

During this process, something even more important came to light. If I do everything for him because it is easier for me, more efficient, and less messy, I am depriving him of the chance to feel pride and develop self-confidence. And that doesn’t move him towards a future of independence. Yes, it will be messy, and sometimes done haphazardly, but I need to let go and trust that we will see returns down the road.

I know there will still be days when I will be too tired to fight it, and I will hang up his coat or make that smoothie. The difference now is that I will remind myself that taking the harder road leads Ian to an amazing future. Maybe even one that includes sharing a place with his sidekick, Nick.

What goals do you have for your collective family’s future? We would love to hear the little ones and the big ones, what challenges exist, and the steps you’re taking to see them come to fruition?

#13 The Big Nasty
Scroll to top