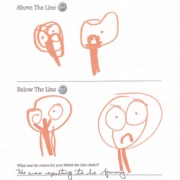 Bus Driver:  “Ian, please sit down and buckle up, or I will call your father.”

Bus Driver:  “Well, then I will call your mother.”

Ian:  “She is drinking with friends.”

It’s embarrassing and infuriating all at the same time. Ian cannot just ride the bus for five minutes without unfastening his seat belt, and pulling a Houdini as he slips out of his supposedly secure harness. He proceeds to either spit on someone, throw something across the bus, or yell loudly. The bus driver has no option but to pull over and get a handle on the situation. And the situation is Ian. This inevitably led to Ian being formally ‘written up’ by the driver.

We didn’t receive this phone call until later in the evening. After all, Chad is hard at work, and apparently, I am, “drinking with friends?” Seriously, that is what he chooses to say in a complete, intelligible sentence – despite his speech delays? This kind of progress is something we would normally share with his therapist. It structurally checks all of the boxes: subject-verb agreement √, logical  √, and easy to understand √. It is perfect. Except, it isn’t. It is anything but, because in those six words, he captures my imperfections as a mom.

It is not just the mere combination of the words, as much as what they represent. Being his mom right now is too much, and he senses my resentment for all of the sacrifices that I am making. Sacrifices for him. He sees right through me, and it breaks my heart.

Reflecting back on that year, I shut my world out with music, wine, and crying. I completely unraveled. Always taking Ian’s every need into account, I felt suffocated. The only option was to escape, which clearly involved drinking with friends. And even that was not without its challenges.

Departing the house for just one hour was practically an act of Congress.  One night, a friend and I resorted to drinking wine from Hydro Flasks in the parking lot at one of her kid’s activities. Yep, that happened. The sheer fact that it was so challenging to be away without worrying that everything would fall apart, left me feeling even more restricted. Ultimately, I felt constrained and tethered to expectations which fueled the fire even more. I took whatever opportunity I could find to forget the overwhelming responsibilities of raising a ten year old, who was still like a preschooler in so many ways. Some days I felt like I was in the movie, Groundhog Day.

There were limits to what I could ‘get away with’ considering the kids’ busy schedules that needed my attention and coordination. It wasn’t as if I would hit the bar and drink until midnight. I was frequently finding a friend who would meet me for a drink before dinner. This way I could avoid after school time, in hopes of returning to my reality more relaxed, and maybe more oblivious to the monotony of what would come next. Oblivious to the same questions being asked over and over, or the same arduous bedtime routine.

When I took that first sip, I reassured myself, “Look what I have to put up with – you deserve this.” Unfortunately, even after this time away, I arrived back to the situation feeling no better than before.  I often sat in my car, cried, and listened to music, waiting until I had pulled it together enough to walk in with a smile on my face.

Despite my efforts to minimize the effect on my family, my avoidance had an immense impact, that sadly I was not able to see until years later. Grace witnessed me crying more than I wish to admit.  She was barely a teenager at the time, and if anyone should have been crying on a shoulder, it should have been Grace, on mine.  My unhealthy coping mechanism resulted in less engagement at home, and thus a disconnect with everyone in the family.

“Perhaps we only leave,

So we may once again arrive,

To get a bird’s eye view

Of what it means to be alive

For their is beauty in returning,

Oh how wonderful, how strange

To see that everything is different

But know it’s ONLY YOU who’s changed.

There is no doubt that my ‘meltdown’ year of 2016 happened for a reason. Most learning emerges from times when we are pushed to our limit and perhaps breaking, if not broken. Life with Ian is not any less challenging than it was back then, but I have finally accepted that this is the journey we are on. Not to say I have it all figured out – far from it – but it is a constant reminder that my perspective can shift, even if my situation remains the same.

Bus Driver: “Ian, you are being such a great role model on the bus, I would like to call your father.”

Bus Driver: “Well, then I will call your mother.”

Ian:  “She is waiting to dance with me in the kitchen.”

I still love to indulge in a glass of red wine and good conversation with a friend -preferably on my backyard deck – but I wouldn’t miss time with Ian, a hockey game, or dancing in the kitchen for anything.

Do you have a ‘seeing things differently’ story to share?

#12 Our Future is Now
Scroll to top