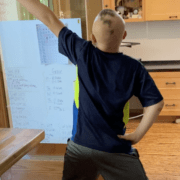 “And Above all, watch with glittering eyes the whole world around

because the greatest secrets are always hidden in the most unlikely places.

Those who don’t believe in magic will never find it“

Every day when Ian steps off the bus, he’s jamming to his tunes as he bops up the driveway, and I know exactly what’s next. He busts through the door, and without either of us saying a word – we both start dancing.  In that moment, everything is perfect. Even though I sometimes wish I had a typical 14-year-old, I doubt many kids his age would be caught dancing with their mom in the kitchen.

This love of music does not just happen in private. Last week Chad, Grace, and I were watching Ian play his Mites hockey game. That particular afternoon, they were playing some rockin’ dance music. All of a sudden the ‘Chicken Dance’ is blaring through the speakers. Without hesitation, Ian dropped his stick in the middle of his game – kids swirling around him – and began to dance like a chicken.  Talk about not taking life, or a hockey game, too seriously. Ian aspires to play high school hockey. With the attitude he has now, I know he will never stop loving the game and playing hard.

This innocent outlook on life shields him from being aware of the world’s challenges, politics, and the movements going on around us. I wish I could have that luxury some days. Especially this year when life has been so heavy.  Sure, he knows there’s a virus, but that is the extent of it. Luckily his Obsessive Compulsive Disorder (OCD) keeps him wearing his mask at all times; however, he is oblivious to the implications of COVID and creating a vaccine. Ian’s biggest concern is if there are enough leftovers crammed into his breakfast Big Nasty – a quesadilla filled with more food than I eat in one day.  He also frets about how much time he has left on his ipad before it will reach its daily limit and shut down.

Unlike Ian, the rest of us are completely consumed by time. We use calendars religiously, and every device we have tells us what time it is. Don’t get me wrong, Ian definitely thrives on a schedule and an understanding of when things are happening.  He just doesn’t wear a watch and is not ready to be accountable on his own.  His calendar on the wall in the kitchen only needs to be a week ahead to inform him of which personal care assistant (PCA) is coming over and what therapy he has at school. Despite his daily routine being spelled out, his sense of time and the bigger picture are skewed. When asked about any games coming up, he quickly states, “I’m playing a football game next week, when the virus is over.”  Neither is true, but I sure wish for both.

Ian’s world view may not always serve him well, as it often prevents him from seeing the real dangers around him. He has learned about strangers and about being careful while biking, for example. I believe he does understand this at some level, but there have been times when he is hanging around the school playground and has obviously talked to a stranger.  We know this right away, as an unknown call comes through on our cell phone. This caring person is just wanting to make sure that it’s okay for him to be at the school alone. We’re always thankful for this, but then it crosses our mind that not everyone will always be that helpful. In Ian’s world, he imagines everyone is wonderful and friendly.

Luckily, more often than not, Ian’s incredible imagination makes life fun and interesting – and sometimes annoying, if I’m being honest. If he discovers a Skee-Ball machine on Pinterest, or he watches a YouTube video on building a life-size ice cream truck, then, no matter what, to Ian, it is possible. He is usually so excited that he demands to start right now, or maybe after a quick trip to the Dollar Store with PCA, James who describes Ian perfectly.

“Ian comes up with things I would never think of.  It makes me think of a section from one of my favorite books, Name of the Wind, by Patrick Rothfuss. One of the main characters compares music to a large city. He’s classically-trained and knows everything there is to know about the internal structure of music; in the city, he knows all the back alleys and shortcuts, and can write music because of this. His friend, on the other hand, knows next to nothing about the rules. But instead of getting lost in the maze of streets, she simply walks through the walls. It is because she doesn’t know any of the rules, that she can write amazing music!”

Thank goodness for our patient and creative PCAs, like James who really ‘see’ Ian and get it. Ian may not know the rules about how things work, but sometimes that’s when the most creative things happen.  Once in a while, if we could all think this way, we may discover something amazing, not only about what we are able to create, but also about ourselves. Often being able to step outside the boundaries is when the great things happen.

I’ll bet most adults would give anything to eliminate some of the boundaries in their life, too. Being able to worry a little less about work performance and outcomes.  Likewise, I’d guess most teenagers would prefer to think less about grades, or comparing themselves to others. Ian is lucky in that way, I guess. He has no clue or concern about any of that.  He’s in 8th grade, yet he is academically at the 2nd grade level. He could care less. He is simply proud each day to complete his math facts, and earn smiles for his behavior reward chart at home. When questioned by his speech teacher, “Do you think you are different from other people?” He casually explained, “No. I’m just me. I have a different voice. I am older. I am 14.”

Unlike most kids his age, he has his career figured out.  When asked about this, he confidently explains, “I want to be a teacher. Like Mrs. Smith*.  She has a lot of stuff. She carries a phone and radio in case someone gets loose.  Like Suzy…Suzy can run through the school.”

So basically he wants to be a special education teacher. Honestly, I cannot think of anyone better to do that than Ian. It is likely that his future students will agree, when they have a video game break each day and learn from the gaming master. Ian has, mostly on his own, figured out the intricacies of the advanced video game Fortnite. This morning while playing, he explains that he wants a glider for his birthday. I asked him if there were Fortnite action figures like that at Target and he says, as if I’m crazy, “No mom, I mean I want to fly it to school! Wouldn’t that be cool?” I  wouldn’t doubt if this is the mode of transportation Ian assumes Santa uses.  Once again this year, I was blessed to witness a child who runs to the Christmas tree with eyes wide open.

It is so clear to see, based on Ian’s plans for building life-sized ice cream trucks, owning a Fortnite glider, and becoming a teacher, it should make sense to all of us that playing high school hockey is not out of the question.

Ian is uninhibited about his life, his body, and his thoughts. I often discover my favorite things about him when I take the time to see the world through his eyes. These blog posts – and the book I plan to write – detail our journey together.  I am writing about him, but also because of him. He reminds me that anything, even writing a book, is possible. All we need to do is believe in ourselves, a little magic and Santa.

I would love to hear your stories about the magic your kids, or others, have brought to your life. Comment below or email me if you would rather be private.  lisa@littlewitt.com

GO TO WITTFITT HOMEPAGE
#6 : Too Smart for His Own Good..?