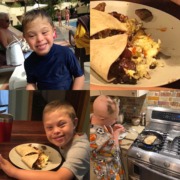 The Big Nasty! These three words together just make you wonder if this is an inappropriate dance move, a reference to the 1980s movie, The Big Chill, or maybe a repulsive 21st birthday shot. Luckily it’s nothing that crazy, but to the Witts, it is a common household word. In our life, The Big Nasty is an amped-up quesadilla which symbolizes comfort, security and order to Ian, in a world he cannot often control.

From early on, Ian has thrived on routine and consistency, which I also need in my life. I often blamed these traits on Ian having Down syndrome, but Chad laughs and disputes this, by pointing out, “the apple doesn’t fall far from the tree.” This could not be more true. I am discovering that Ian and I are more alike than we are different. Though I have relaxed some with age, deep down I’m still that Type A, neurotic person who truly loves to know what is coming next, including what I will eat. Ian clearly feels the same, as he demands to know, “What’s for dinner?” and proceeds to ask that question ten times a day.

A waffle, a banana, and juice, was Ian’s breakfast from a young age. I’m not sure how this ritual began, but running out of waffles was a national emergency. On a few occasions, I woke up to discover the freezer did not hold the coveted waffle, so I was off to the store at 6 am. There was no way to deviate from this meal and no other acceptable substitution for a waffle. I often thought, ‘how ridiculous,’ as I made my latte the exact same way, every day. At the time, I figured I had enough to worry about with staying on top of his education, chauffeuring him to therapy, and encouraging him to ride the bus appropriately. Thus, any eating or food issues held a lower priority.

A trip to Mexico, of all things, eventually ended our waffle rut. We are passionate about travel and a Mexican destination was on our bucket list back in 2013. However, Ian was only eight, so including him on a vacation like that seemed too overwhelming, and to be honest, not much of a respite for us. Everything would be new, including food, and every day would lack the routine he needs. Chad, Grace and I decided we would scope out the resort first before adventuring there with Ian. After what proved to be an amazing trip, the next year all four of us took the leap to cross the border. Turns out, there aren’t a lot of waffles in Mexico, so this is where Ian’s culinary routine took a turn, and his adventure with new foods began. A more authentic Mexican breakfast would include a quesadilla with eggs, cheese and refried beans stuffed inside. It was love at first bite. Little did we know how transforming this would be for Ian, and surprisingly, I learned to be more flexible with my food choices, too.

Goodbye waffle. Hello quesadilla. And this was the birth of the Big Nasty, as many have come to know it.

I welcomed this change and was happy to add variety to Ian’s diet, however this new staple was no waffle to just pop into the toaster. The making of the Big Nasty requires a Master Chef rating. The foundation, gleaned from our days in Mexico, consists of refried beans and cheese, which is topped off with an egg. We expanded the tortilla, and subsequently took Ian out of his comfort zone, without him even knowing it. Over time, more ingredients were slowly added, boosting his nutrition. Obvious breakfast ingredients, like bacon or breakfast sausage, were well received. As he grew, so did the Big Nasty. Any dinner leftover could be incorporated, resulting in a melting pot of ethnicities.

These days, any ingredients are acceptable to Ian. Sometimes he enjoys the rice, steak and corn Big Nasty; while other times the burger, potato Big Nasty is a perfect way to gear up before a tough morning hockey practice. He has been known to request what I consider an unlikely (disgusting) mix of foods, such as a hot dog, rice, and mac & cheese. Hence the term Nasty.

We are not the only ones cooking this meal, sometimes good friends become Ian’s sous chefs, before they know what hit them. One evening, our cats needed a trip to the animal hospital, so on short notice, our good friends Aaron and Liesl came to the rescue. Before I was able to advise them of the dinner plan, Liesl calls to say that Ian guided her through the Big Nasty – for dinner. Of course he did. I had to laugh because Ian knows we make those only for breakfast, but he pulled a fast one on her and coached her through the Big Dinner Nasty. I wonder what ended up in that tortilla? Liesl had never made one before, and much to my surprise, Ian declared, “You earned the Big Nasty Badge!” He walked over to her and pretended to pin on this newly created ‘award.’ Liesl recalled, “I liked the pinning ceremony the best.”

On a few occasions, our Personal Care Assistants (PCA) have been asked to care for Ian for an extended period of time. As I’ve shared before, we have detailed instructions in the Ian Manual, so now the Big Nasty must be included in its pages. The PCA who agreed to care for Ian had never stayed over night, so she had not yet experienced the feat of executing the perfect Big Nasty. I needed to be as detailed as possible, which included taking pictures of each step to assure Ian that it would comply with his specifications. We prepped enough tortillas with the base ingredients, and stored them layered in a container in the fridge, ready to go. All she had to do was pull one out, put it on a plate, add three to four more foods, cook, and serve. Viola! From what we heard, Big Nasty making, and the rest of the week, went off without a hitch. When recently asked, most of our PCAs recalled how surprised they were that he could eat this monstrosity at 6 am. They also remembered marveling at the sheer amount of food stuffed inside, and how Ian could consume it rather quickly.

This selective group of people who know the Big Nasty intimately, always seems to feel a sense of pride. They detail the story of how Ian always includes colorful commentary about who makes it the best (Chad), what needs to go inside (more than you think will fit), and how Ketchup must be included (who knew?).

Even after much practice and my attempts to master it for years, Ian informs me that Chad is still the best Big Nasty Maker. Mind you, I prepare it the majority of the time. I must admit, I do not stuff it with enough food, maybe to avoid a mess, to truly make it Nasty. Yes, I am reminded once again to let go a little. Perhaps this is why I have yet to earn my Big Nasty Badge.

Considering Ian has successfully guided others through making his favorite breakfast food, I should start acknowledging that he can whip this up on his own. Perhaps, as Grace shared with me this year, it is time he learns to make it independently. Thinking back to last week, he made so much progress when I raised the bar and expected more from him. Even though it involves many steps and, let’s call out the big one: using the gas stove, perhaps he has some skills to teach me, and just maybe I will finally earn my Big Nasty Badge.

Make your version of a Big Nasty!

Include: Your Big Nasty title, a list of ingredients and a picture.

Maybe you and I will earn our Big Nasty Badge.

How to submit: Email: lisa@littlewitt.com

GO TO WITTFITT HOMEPAGE
#12 Our Future is Now

#14 Ring Leaders of the Shit Show
Scroll to top