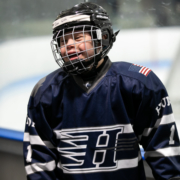 Our son Ian is on the KINGS team with your child, so Chad and I wanted to introduce him to you. We know your child may have questions, as Ian is quite a bit bigger, and not quite as coordinated as the other players.

At first, I hesitated to write this letter because I didn’t want anyone to take it as us asking for anyone to treat Ian differently. However, I truly feel this could be a great opportunity for others to learn about Down syndrome and kids like Ian.

If you feel comfortable, we would love it if you would share this information with your child about Ian and about Down syndrome. We want all of you to know that we are open to talking or answering questions at any time!

I also have a blog about our journey with Ian if you are interested.  https://www.wittfitt.com/lisa-witt/

We look forward to an amazing hockey season!

Information that may help you as you talk with your child

Down syndrome and Ian:

Ian was born with 47 chromosomes. This one extra chromosome gives him unique traits. His eyes are almond shaped, he is shorter than kids his age, his mouth is shaped differently, and his tongue is a bit bigger, which means he may not always be easy to understand. Just ask him to slow down or say it again. He is used to that!

Because of his extra chromosome, it takes him a little longer to learn, so he is behind the other kids in math and reading. Although he is in middle school; he reads at a 2nd grade level. He has been skating for several years, but each new skill takes longer for him to figure out. We expect him to follow the rules like everyone else, but that can sometimes be hard for him. He is working on it!

Ian loves video games, sports, playing board games, hanging out with friends, and biking. He is really not all that different from you.

Feel free to reach out anytime:

Another hockey season is underway, and it gives me time to pause and reflect on last season. I think about how far Ian has come despite the challenges, and also my desire to make this season different. Impactful.

During almost every game last year, Chad and I sat with Ian’s team to keep a watchful eye on him.  Of course we wanted to be in the stands with the other parents, but we are not like all the other parents.  We have a child who may push someone, refuse to come off the ice when it is time to switch lines, or simply disavow all knowledge of the rules. This is often frustrating to watch and even embarrassing, yet encouragement from his young teammates and coaches allows us to see beyond his struggles. I never leave the rink without at least one tear trickling down my cheek. Watching him skate is simply magical.

I often close my eyes and reminisce about his first days on the ice and how blessed we are, years later, to be witnessing him in a Hudson Hockey jersey playing this incredible sport.

Moving and staying upright on a thin blade is no easy feat, much less for someone who may have to work harder to balance himself. Although Ian plays soccer and runs cross country, nothing compares to the skill required to play hockey, and follow a puck that seems to move faster than the speed of light. It hasn’t been easy for him from the start, but his desire and determination are like a lit fire.

Over the years Ian watched and admired his sister Grace, who is an avid figure skater. He wanted to be just like her, so for the last few years, he participated in learn-to-skate classes and spent hours on the ice with Grace.  He immediately was up to the challenge and wanted to prove that he could skate.

At the perfect time in Ian’s skating career, Ian met Easton who became his PCA (personal care worker).  It just so happened that Easton was a varsity hockey player, which inspired Ian to take up the sport.  They also became fast friends and Easton coached Ian one-on-one. Soon he encouraged us to have Ian join Hudson Hockey.

The thought of Ian playing hockey was crazy to me at first.  He was thirteen, while all of the other skaters were seven or eight. Plus, it seemed that all these kids came out of the womb with skates on, stick in hand, and ready to play. They have some mad skating skills for being so young! “How could Ian compete with this?  Would he be accepted?”  Despite my hesitations and worries, Ian’s first season was beyond all of my expectations.

I also skated when I was younger, and I loved it when Grace showed interest and elated when Ian followed in her footsteps.  I never  thought I would be a parent of a hockey player. Ian’s process of learning to play hockey was not simple like skating was for Grace, a ‘typical kid’, starting a new sport. It took years for Ian to get to this point. Often parents of children with special needs never have the chance to ‘be like everyone else’ in this respect. Often our kids are not able to participate in sports in the same way that other kids do. Being able to now say I am a “hockey mom” is an honor.

All summer, I was counting the days until Ian’s second hockey season would begin.  As we anxiously awaited the team assignments, I felt a strong calling to write a letter to the parents of his teammates about Ian and explain his extra chromosome.

Though it is obvious that he has Down syndrome, what does that mean?  Why does he look different and sometimes act different?  These are all of the questions I figured the parents and kids may have, so why not be candid and allow everyone to get to know Ian, and learn about his strengths and passion for the sport!

I hope my message empowers the parents and kids with knowledge and breaks down any barriers that may exist.  It’s not about making people aware of Ian so they act differently toward him, or so they accept him if they otherwise wouldn’t.

It is about the opposite…

It’s about everyone knowing that Ian is not all that different from everyone else.

In the end, he’s just a boy with a stick, and a puck and some love.

I would love to hear your inspirational sports stories, so please share a comment below or email me if you would rather keep it personal.  lisa@littlewitt.com

*Read Easton’s GIVING STORY about Ian and their friendship.