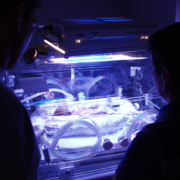 “So, two things,” the doctor nonchalantly reports,  “Ian needs to have surgery to fix a blockage in his intestines, and you are aware that he has Down syndrome, right?

At that moment, time stops.  It is unreal.  My husband, Chad and I are sitting in the NICU waiting room at Children’s Hospital, in shock.

I flash back to two days earlier at Hudson Hospital.  Seconds after he was born, we immediately asked, “Does he have Down syndrome?” since the Triple Screen Test during my pregnancy had indicated it was a possibility.

The doctor and nurse confidently assured us Ian looked great. His Apgar scores were high and he was perfectly normal.  A wave of relief washed over me, but too soon. Within a day we knew something was wrong!  Ian was throwing up breast milk, and he had not pooped.  Something was threatening his life .  He was immediately sent to Children’s Hospital.

Snapping back to reality, I focus on the sketch the surgeon is creating on the computer screen as he details the procedure–Duodenal atresia–which will correct Ian’s blocked intestines.  A flash of panic comes over me not about Down syndrome, but about his life. Will he die in this surgery? He is too little.  Too fragile.

Our eyes drift from sketches to peer into Ian’s dark room, which appears to be engulfing his little ‘glass house.”  The special effects were really from the Bilirubin lights due to his jaundice, but they seem to display him in an extraordinary light from the beginning.

Then my mind quickly switches gears again, not able to truly comprehend the two sentences we’ve just heard.  He doesn’t even look like he has Down syndrome.  These doctors must be mistaken.  Tears well up in my eyes. My mind is flooded with a million questions floating in a wave of confusion.

Chad senses this and takes my hand. “One thing at a time.  Let’s think about the surgery first and the Down syndrome part later.”

He is the voice of reason at that moment,  knowing exactly what I need to hear.

The doctors at Children’s Hospital turn out to be right.  Ian does have a special super power– an extra chromosome on the 21st.

I hate to admit it, but I think I would have fallen apart if seconds after birth, we had been told he had something “not quite right” with Ian. I would have focused on that abstract worry about what that meant, instead of focusing on how beautiful he was no matter what.

The first two days, not knowing he was any different from any other baby, we fell in love, as all parents do.  Those few days, almost a grace period, allowed me not to rush ahead and imagine his life, but to let it unfold.  Fourteen years later, he is a strong, smart, and incredibly stubborn boy, but I still remind myself daily to ‘let go’ and trust the journey.

I believe with all of my heart that these days were created perfectly for me.  When the doctors did confirm that Ian had Down syndrome, I was ready to absorb what that meant.  Looking back, knowing what I now know,  I would love to tell my earlier self, “It’s ok, Ian will be challenging, but you will be a better person for being his mom.”

What do you remember of your child’s unique birth story?  And how did your beginnings together affect you?

I know many of your have LOTS to say about your life, family & experiences but would rather not post for all to see.  I really get that, so instead PLEASE email me. I really want to hear from YOU! lisa@littlewitt.com

#2 : Learning at Home
Scroll to top