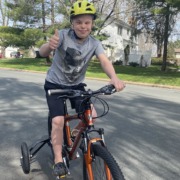 Every year, a few months before his birthday, Ian requests that we start a list with his crazy ideas, so that we are prepared to fulfill all of his birthday wishes. I often catch him on Amazon searching for the next ‘big’ toy or watching product videos of a family blissfully playing some complex game – which, with our dynamics, is not a reality. Ian’s list entails items I already know are a bad idea, or perhaps cost more than I would spend on a luxurious spa day. For instance, a hundred dollar robot that Ian imagines following all of his directions, such as cleaning up his toys or packing his lunch (if this existed, I would have already purchased one). Or a crazy contraption that Chad will spend hours constructing that will either break within the first two minutes or collect dust in the corner of his room. The last thing I need is one more unused toy to clutter the house. Recently we have given him the best gifts ever – the ones that are invisible to us – like a fortnite battle pass (which the Easter Bunny brought this year) or a new game download for his Switch. However, in the past year or two, he has upped the ante and asked for his own phone. Not just any phone – an iPhone.

After some research, I discovered many other kinds of phones on the market geared toward elementary children who are not yet ready for a ‘real’ phone. Most simple kid phones, or even a flip phone, look more like a glorified walkie-talkie and have limited options and no app selection, which would be perfect for Ian – at least in my eyes. However, these ‘babyish phones,’ as Ian would call them, would probably not suffice for our technology guru. Chad, Grace, and I have iPhones, and Ian has watched us with these magical mini computers for years; I believe our days of giving him anything but an overpriced device are gone.

Ian is keenly aware that the majority of the kids in middle school have phones, and typically expensive ones, like an iPhone – which is still a crazy concept to me. I know he wonders every day why he doesn’t have a phone, as he observes kids making calls and texting as they walk down the hall after school. Chad and I have discussed this possibility for his 15th birthday, but the cons outweigh the pros. Just at the time we were considering it – as if the Universe was sending us a sign – we were quickly dissuaded based on a continued inability for Ian to simply PUT THE DEVICE DOWN. Often, when it is time to head out the door to school or brush teeth and hop into bed, he is engulfed in a Pokemon battle that simply cannot be paused. He, like most kids, tunes out the rest of the world and loses track of time. The bus might be sitting in the driveway, but that does not compel him to move a muscle. This is when, after a few prompts, we need to intervene by tapping into our devices to shut his games down. If he had his own phone, I can picture him grabbing it, as he hands over the locked iPad, to start up another round of his favorite game. So, instead of preparing one of our old phones for his use, our energy was directed into researching ways to lock Ian’s ipad and figuring out how to set limits on his Wii and Switch screen usage. These challenging scenarios all signal that, while Ian may be ready for a phone, we are not.

Another compelling reason to wait to put a phone in Ian’s hands is the ability for him to call anyone at any time – with 911 potentially being the call of choice. Over the years, he has managed to swipe one of our phones, call 911 without us knowing, and sure enough, an officer shows up at the door. We have discussed how 911 is strictly for emergencies only, yet what constitutes a dire need for a police officer is quite different in Ian’s eyes. When asked, Ian replied that he simply wanted to see the officer and say hello…in person!

Adding a new device to his technology repertoire will become necessary, as he is growing up, and a phone will allow for communication and freedom. Eventually, I know that Chad and I will be able to survive him having a phone – and it may even be helpful for us, but first, Ian needs to show some maturity and the ability to listen to instructions, put down a device when asked, and communicate, as opposed to going into silent mode. Then the next step, like most everything else in Ian’s life,  will be the need for extensive training, and by that I do not mean navigating the phone. That, he could do with his eyes closed, and likely better than any of us. I am referring to learning appropriate uses for a phone, such as: knowing (and honoring) what time is acceptable to call someone, putting the phone away during school hours, and when he should – and should not – dial 911. This path will include his special education teacher, who will incorporate this new phone into his functional skills class curriculum, and will be key to his success. Ian will take this learning more seriously knowing that his teacher, and not just his parents, insists on phone rules. Likely, this will require a specific game plan with set hours of use, supervision for the first few months, and probably an additional reward chart as incentive for using his phone as it is intended. We are so thankful for the ability to connect home and school in such a helpful way and having partnership in guiding him with these milestones.

For his 15th birthday, which is today, his big gift is not a new iPhone, but rather a custom-built bike with big tires and rugged training wheels. Though it is not technology, he will be thrilled with this new mode to escape the house! I am hopeful that when he turns sixteen, we will wrap up a shiny, new iPhone – well, more like one of our old ones – and witness his success using it. For now, my worries are directed toward his new hot rod taking him too far from home when he simply rides off without asking. At least we have tracking on the bike, combined with the comfort that Ian has many fans, our friends and neighbors, who often call or text us to say, “we saw Ian cruising down the street alone and we wanted to make sure that was ok?” Despite my fears as he bikes off on his own, this new set of wheels allows him a kind of freedom he rarely experiences. Even if it’s not an expensive iPhone- it is priceless to him.

Do you want to send a Birthday Wish to Ian?

He would LOVE it!

GO TO WITTFITT HOMEPAGE
#24 I Need a Vacation from Vacation