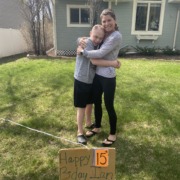 Birthday weekend was upon us and there was an air of magic all around. Ian sprinted down the driveway and practically jumped into Grace’s arms. He had been anxiously awaiting her arrival for weeks. Asking me, probably every day, “Is Grace coming home, Is Grace coming home?” To which, again and again, I answered, “Yes, Ian. She is coming home specially for your birthday.”  As I watched from the window, with a tear streaming down my face, they hugged for a long time. Without a complaint, he willingly helped Grace shuttle bags and boxes to her room. So thrilled to have her home, he did not leave her side for hours.

Ian requested that we order Chinese food and have our good friends over to celebrate. He was satisfied with no party, yet again this year due to COVID. Last year, his 14th birthday, amidst the beginning of the lockdown, ended up being amazing. This year’s small gathering proved to be just as much fun as any big bash we could have planned.

Ian greeted our friends when they arrived and despite gifts in hand, he waited patiently for everyone to gather in the living room to witness the gift opening.  He was given a gift card to his fav ice cream shop downtown and a personalized  Hudson Hockey jacket, perfect to wear to an ice cold skating rink while waiting for his practice to begin. Without being prompted, he gave his buddy a high five and, while saying a heartfelt ‘thank you,’ hugged the adults, and allowed us to take pictures donning his new attire.

We sat down together for a great meal, eating, laughing and truly enjoying each other’s company.  After dinner we all piled into our minivan, cranked some of Ian’s favorites tunes and headed downtown for sweet birthday treats.

And that was only the Saturday pre-Birthday, as Sunday was the big day when Ian turned 15. After chowing down on the Birthday Big Nasty, he and Grace headed off to Caribou for his usual sister bonding time, complete with a sweet, mango smoothie.

Next up, gift time! Chad had worked, alongside the local bike shop, to build out a bike that would work for Ian’s growing body, and also accommodate his lack of balance, with the addition of rugged training wheels from his old bike. Chad covered the bike with blankets, and it was ready to be unveiled in the garage. As the door opened, Ian’s eyes lit up with sheer joy.  He swiftly uncovered his gift and immediately ran to hug Chad. Seconds later, with his helmet on, he was off down the driveway. I managed to snap pictures and videos as he whizzed by. The ride did not last long, as he knew he had more presents in the house. We all gathered around, as he slowly opened each one, saying thank you and enjoying each gift — many of which were additions to his new bike, such as special pedals and a bag for the back to carry his basketball. Ian asked to FaceTime with both sets of grandparents, so they would be able to share in the celebration. Score!

In the evening, as planned, the four of us listened to music, enjoyed some cocktails (or mocktails), listened to music and made amazing homemade pizza, ending the evening playing all of the games Ian could carry into the living room. Then Ian was whisked off to a spa night with Grace, where they would put on crazy colored face masks, laugh, and take goofy pictures. This time with family, and celebrating Ian’s birthday so blissfully, was just what I needed to fill me up until the next time we were all together.

As Grace pulls into the driveway for Ian’s 15th birthday weekend celebration, I announce her arrival. Silence. No response.

Ian’s eyes are glued to his Switch game, and he barely makes a move. Grace walks in, expecting to receive a big hug from the brother who was so excited to see her, but instead, he did not so much as say hello. After she got settled in, Grace, Chad and I sat on the deck to catch up. Ian? He has not yet looked up from his device. We acknowledge that this is sometimes how it starts, as her arrival is new and different to him, and he needs time to adjust. We have all become accustomed to Grace being away, so this is certainty understandable.

He slowly warms up and maybe says a few words to Grace as the day goes on, but no big hugs or ‘I missed you’ comments. Our friends arrive and before anyone even knows what happened, Ian already has the gift card open, and he is about to tear into the other gift. We convince him to wait so we can all enjoy the moment. He loves his new hockey jacket, but I need to whisper in his ear to say thank you (not sure if he ever did). When dinner arrives, he is hell-bent that we all sit down and eat immediately, so we can head downtown for ice cream right after. As usual, the night ends around 8:30 or 9, otherwise we end up with a very overtired Ian the next day.

Though Saturday was a bit rough around the edges, Sunday, Ian’s actual 15th birthday, was a new day. Birthday morning arrived, and I was hopeful that the novelty of having Grace home and the unknown of the birthday celebration would have subsided. That was not at all the case. After being gone about 30 minutes on their Caribou date, Grace walks into the house, visibly angry and detailing how much of an ass her brother is. He complained the entire way to Caribou, was ungrateful, and kept opening and closing the window just to annoy her. Sad about how that turned out, I figured gift giving would change the sour mood, so we request that Ian come outside. He was hesitant at first but eventually agreed.  The garage door opens, Ian runs over, uncovers the bike and says, in a very sassy tone “You blew it Dad!  I knew it!”  No ‘thank you,’ no hugs, just a flippant boy ready to take off on his new wheels. The rest of the gift opening was similarly disappointing, as he ripped through gifts, acting as though he knew what he was getting. He refused to do FaceTime with family, and did not act overly thankful for anything – at least in that moment.

That evening, which was supposed to be family time with pizza and games, ended up being just Chad and me. Grace went off with a friend, not feeling welcome after the weekend she experienced with Ian, and he decided to watch a show and eat pizza alone.

Although I would have preferred the first version of Ian’s 15th birthday recap, our reality can unfold quite differently. Knowing that Ian likes consistency and predictability, a birthday evokes a lot of emotions for him that I imagine are not easy to sort out. Once the surprises were over, and he was able to process and absorb all that had happened, he was ready and able to give Chad a big hug and express how much he loved his bike. I received an unexpected show of affection while taking pictures – in front of the special homemade sign I have used for the last fifteen years. Looking back on this birthday weekend, I will cherish the little things and once again, try to see life through his eyes.

We would love to hear about your stories of celebrations — the expectations and realities of these events that can rattle us, make us cry, and make us laugh, all at once.

GO TO WITTFITT HOMEPAGE
#25 To Phone or Not To Phone?