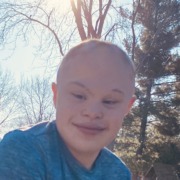 “My view of Down syndrome has been very clear since I could understand what it meant. Growing up around Ian has made my view very concrete. I know it is a congenital disorder by definition but, in my head, I see it more as a blessing. The world needs people who have such a positive, optimistic outlook on life the way Ian does. With that, I choose to view Down syndrome as a disorder that can bring happiness to people, the way Ian has for me.”

~written by long-time friend and PCA of Ian’s.

In honor of World Down Syndrome Day – tomorrow March 21st – my blogs for this weekend are dedicated to Ian and all individuals with Down syndrome. For those who may need it, here is a refresher on the significance of the number 21: 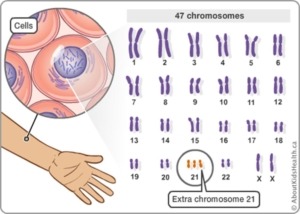 Down syndrome or Down’s syndrome, also know as Trisomy 21, is a genetic disorder caused by the presence of all or part of a third copy of chromosome 21.  It is usually associated with physical growth delays, mild to moderate intellectual disability, and characteristic facial features. ~Wikipedia.

When Ian was diagnosed, I knew very little about Down syndrome, nor about its name. I remember those first few days, hearing the words Down syndrome, and feeling sorry for him, as if somehow his life would never have any meaning. A sense of hopelessness washed over me, as the word ‘down’ echoed over and over in my mind. Why was his disability labeled using a word that the dictionary described as “to a lesser degree; or in a lower or worse condition or status”. (Merriam-Webster)  This meaning affected me more than I realized.

Despite the way these words made me feel, this extra chromosome disorder was not named to put this disability in a negative light, but rather, to honor the English physician, John Langdon Down. He was the first to accurately describe a person having the characteristics of Down syndrome. It made perfect sense to name the syndrome after the doctor who identified the criteria. At the time, I am sure nobody gave this a second thought.

Changing the term Down syndrome to a different name wouldn’t alter the pace at which Ian learns new tasks, nor would it impact his behaviors or social graces; but understanding how words can inform our perception of a person’s abilities allows perspectives to shift. Would I have felt more assured that Ian’s life would be okay if the doctors had said, “Ian has Sunshine syndrome”? As silly as it sounds, yes – because words matter and names carry weight. The vibration and energy surrounding Ian’s labeled diagnosis would be uplifting and positive. When I hear the word ‘sunshine’ it evokes images of a beautiful light streaming through the trees, just as Ian’s light streams through the world, showing me life in a unique way.

Before Ian came into our world, not only did I have limited knowledge, but I also had never had the opportunity to meet anyone with Down syndrome. Now, after almost fifteen years of being immersed in this world, I am profoundly aware of the way in which people with Down syndrome, or any other disability, are identified. I assure you that pre-Ian, I would not have thought twice about saying ‘Downs child’ to refer to an individual with Down syndrome. Most people who refer to Ian as a ‘Downs child,’ or someone who refers to one of Ian’s friends as an ‘autistic boy,’ are not trying to be demeaning or hurtful. However, when a person is being described using their disability first, all of their amazing traits are overshadowed by that one word, or label, often making the person unrelatable, or even someone to feel sorry for. One singular word could never come close to defining the entirety of a person and often leaves the impression of disability, rather than a person having differing abilities.

Imagine a 50 piece puzzle representing Ian with just one of those pieces being Down syndrome. Just one. All of the pieces are needed, but no one takes up more space than the other. No one part defines the puzzle. Each piece is necessary to complete the picture, and they are all equally important. Ian is Ian. I do not see him as a Down syndrome child, but rather an almost fifteen year old who is funny, stubborn, sweet, mischievous, energetic, and he just so happens to have Down syndrome. I wouldn’t change any part of him even if I could; the puzzle of Ian would not be complete otherwise. He would not be the Ian I know and love.

Down syndrome draped over me.

It permeated every cell of my being.

Consumed by what it meant in the moment,

and what it meant for years to come.

settled into the background of my life.

I slowly began to accept, absorb,

far too heavy to carry.

As each day passes,

I see beyond his disability

And I am blessed to witness

And a ray of sunshine.

*We are all learning along the way regarding the language we use to speak about people with disabilities, especially considering its ever changing nature. People may think since we are parents of a child with special needs, that we have it all figured out, but speaking for myself, that is far from the truth. Even in this article, which I referenced in a previous blog, the author states that the term ‘special needs’ may be viewed as condescending or negative. Each person has their own view on this term, however for me, I prefer this to describe Ian.  As I see it, he does have needs that require special care or special attention.

As I write each and every blog, I continually strive to be as sensitive as possible, while still being candid and honest about our life with Ian. Every family has their own views and opinions, so I would never attempt to speak for others who raise a son/daughter with different abilities. I am only sharing our perspective of having a son with special needs.*

Video to help kids (& adults too) understand Down syndrome:

Video by people with Down syndrome: Just Like You!