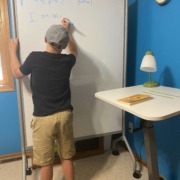 Alice: This is impossible.

The Mad Hatter: Only if you believe it is

Many ideas for Ian’s future job have been tossed around over the years, usually at the dinner table. Though he is not a big conversationalist, like me, discussing his future profession always brings out his talkative side. Immediately, he is excited to share every wild idea that pops into his brain. We have entertained the occupation of scooping ice cream at the local shop downtown that he frequents, being a firefighter or even a superhero. Why not? Superheroes do exist. After all, I am Wonder Mom. The beauty is, in his mind, there is nothing he cannot do. The options are boundless, because he only acknowledges the reasons he can do something as opposed to any limitations that may inhibit him. I sometimes wish a little bit of that naive confidence would rub off on me when I find myself doubting my ability to try something new or venture outside of my comfort zone. As I listen to him explain how he could be both the chef at the fire station, serving up Big Nastys, and the firefighter saving a burning building, he reminds me that in order to really see the possibilities and dream bigger, you need to look past the obstacles. Listening to him rave about his crazy ideas, it’s as if I have been transported smack dab in the middle of a Disney Pixar movie. I smile, nod, and ask more questions, to see what other hilarious things he will say, with his very intense and serious demeanor intact. When I hear his witty responses, it makes life so much lighter and full of hope.

Although fighting fires, or being the newest version of a superhero (because yes, that is a profession in Ian’s world) are still viable options, more recently, Ian has honed in on his ideal career: a special education teacher. I can see why, based on the amazing role models he has had, both in elementary and now in middle school. Of course these educators simply make the job look fun and easy. When asked why he would want to teach special ed, Ian enthusiastically explains, “I get to carry a walkie-talkie to find kids around the school if they get loose.” To Ian, I suppose this is one big game of hide and seek that he would be paid to do.

When any of us think about our career choice, we often look for jobs that not only utilize our strengths, but we often pursue a role with which we easily identify. For Ian, it seems to be second nature to detect when his classmates are struggling or are upset for some reason. Most likely this is true because he is aware of what causes him to struggle at school. I believe his deep need to help others stems from how discouraged he feels at times when he cannot complete a task, or when he feels misunderstood. Ian has a unique perspective, living with his own challenges and is able to authentically relate to others with Down syndrome, or any other disabilities. When asked about his classmates, he is quick to identify why each of them is in this special classroom, yet when I asked him why he was in that same room, he casually replied, “I am a helper to the other students.”  He has not truly acknowledged that he is in the special education room for a reason. Perhaps this is true, because a cognitive disability, like Down syndrome, is not visible to the eye, so Ian doesn’t ‘see’ that he has any disability, as opposed to a classmate who is visually impaired, for example.

From what we have heard, Ian is very observant during the school day. I would not be surprised if he would actually be able to pull off an hour as the special education teacher right now, before receiving any formal training. Although he has plenty of tasks to complete, he seems to find the time to pay close attention to all of the students’ calendars and their whereabouts. He notices when someone is not where their schedule dictates. Apparently this is worrisome to him, so he makes sure that the student, and the teachers, know that something is awry. Perhaps these interventions could be viewed as a bit bossy, yet this trait would serve him well in a teacher role. If I had to guess, he has acquired the, ‘I like to be in charge and know exactly what’s going on’ gene directly from me. Ian was not yet born when I was a teacher, but perhaps he also notices my teacher tendencies, as I create his next reward chart or hand him his detailed, laminated after-school routine checklist.

Keeping track of classmates is one thing, but he is also quite in tune with – or maybe just nosy – his teachers’ conversations regarding what they need to accomplish. He may not always appear to be listening when he ignores the third request to begin his reading activity, but his ears are turned on like the FBI, tracking criminal activity when he hears another child’s name. One day he overheard his teacher explaining that she had not found the time yet to make an activity board for a student, so of course he came home hell-bent on making it himself. He quickly announced that he was planning to tackle this project and would bring it back to school complete the next day. Turns out, this is not a poster board with words that list activities, like I envisioned. No, this is a board that contains the actual activity – like math beads for counting and shoe laces for practicing how to tie.

Ian’s desire to control – I mean help – at school extends outside of the classroom into the gymnasium, where he feels right at home. Ian works in a small group with an adaptive physical education teacher – to improve specific competencies, as well as joining the mainstream class a few times a week. Recently, in PE, he has been demonstrating certain skills for typical students who need assistance. He is not too shy to point out what they each need to improve upon, and his sense of pride is evident in these situations. Maybe being a PE teacher would be his calling which would combine his love for sports and being bossy all wrapped in one. I also think the kids would appreciate his style of playing games, in which rules are really more of a suggestion according to Ian.

None of us, Ian included, ever rule out any possibility for his future endeavors. We cannot predict where life may take him, and limiting that in any way would be a huge disservice to everyone. A few years ago, I would never have imagined him playing hockey on a regular team. When he first stepped on the ice, he wobbled with his skates turned in so far, I had no idea how he even stayed upright. Now, three years later, Ian plays hockey, and it is the most magical experience I have had with him, to date.

Just as Ian has surprised me over the years, seemingly raising his own bar,  I am always encouraged and awe-inspired hearing about other incredible people with Down syndrome who have broken the mold. Two individuals specifically come to mind: they grew up and are doing great things– Tim, an entrepreneur, who operates a restaurant and Isabella, a talented women’s fashion designer. Seeing what these dedicated individuals have accomplished, I have no doubt that Ian will follow suit.

No matter what Ian aspires to be when he grows up, I truly believe the sky’s the limit. If he became a teacher, I can only imagine Ian’s students loving his crazy energy, relaxed sense of the rules, and his goofy humor. Based on his own shenanigans, he would always be one step ahead of his students. For instance, last year, he hacked his Chromebook’s Internet browser during science class and attempted to order Dominos online. With that type of skill set, I am guessing he would include a lesson to expand his functional skills class titled: ‘How to Order Pizza Online to be Delivered to School…Without Getting Caught’. If the special education teaching job does not pan out, there has often been talk about Ian owning a food truck. I can see it now:  Ian’s Big Nastys, rolling down the street offering ‘anything goes’ burritos, 24 hours a day.

For those of you who have kids with different abilities, I would love to hear what your kid(s) dream of pursuing when they grow up, or their current profession if they are already out in the world!